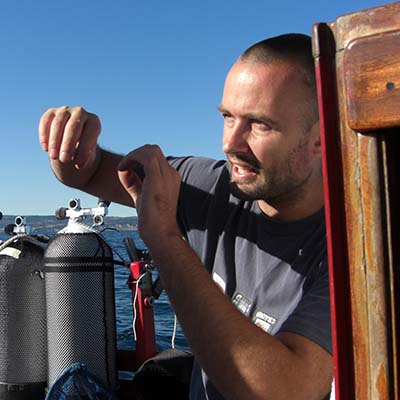 Andrej Gaspari, b. 1973 in Ljubljana, graduated at the Faculty of Arts in Ljubljana, in 1996 with a work on Roman Bridges in Slovenia. In 2003 he defended PhD thesis Late Iron Age and Early Roman finds from the River Ljubljanica at the University of Ljubljana. From 2015 he holds a position of associate professor for the Roman Archaeology at the Department of Archaeology. Being an author of over 70 scientific publications, his primary fields of interest are underwater archaeology, ancient Mediterranean and continental shipbuilding traditions, archaeology of cultural interactions in the hinterland of the northern Adriatic and material culture of Late Iron Age and Early Roman period between northern Italy and western Balkans. As the head of the Group of Underwater Archaeology Workgroup at the Institute for the Protection of Cultural Heritage of Slovenia (2002-2007) he directed investigations of several underwater sites at the Slovenian coast and in the inland waters. At the position of under-secretary at the Ministry of Culture of Republic of Slovenia (2010-2014) his responsibilities included the issues related to the management of underwater cultural heritage. He was been elected member of Scientific and Technical Advisory Body to the Convention during two terms period (2009-2013). Member of ICOMOS-ICUCH since 2007.